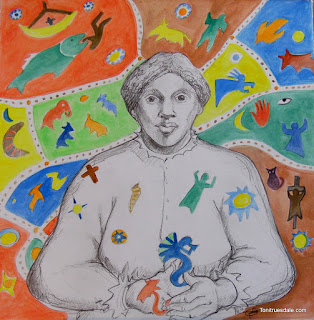 Harriet Powers (1837-19110) Textile artist/Storyteller/Wise Woman was born into slavery in Athens Georgia. Her quilts are legendary in that they clearly show the direct influence of African decorative arts. American slave culture was far more complex and secretive than history allows in our Eurocentric telling. Harriet’s parents were probably from the Kongo or central Africa but her quilts show a distinct west African style. The Dahomey applique artists were traditionally males working in guilds and highly esteemed in their ancestral role. Harriet’s quilts show this strong influence as well as in the design which uses a vertical format often seen in west African textiles such as kente cloth. She very probably learned this from other slaves in secret conversations where oral history was heard.

Imbedded into her quilts are mnemonic messages, as reading was forbidden to slaves; information, aesthetics and information was transmitted, and stories preserved for future generations in this colorful symbology of textiles. Her beautiful quilts are testimony to the interconnected society for the kidnapped African people from many diverse nations, where all identity appeared purposely to have been stripped. And yet culture was continued in plain sight in the arts, food, religion and voice. Harriet’s use of symbolism in her art included the Biblical as well as from many African societies.