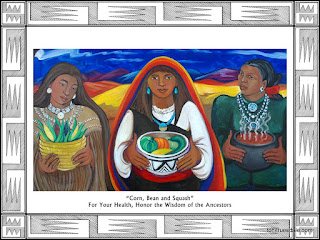 “The Three Sisters”
by Toni Truesdale

Corn, bean and squash are  known by many
First Nations as “The Three Sisters”.
These crops were developed by indigenous farmers
All over the Americas pre European contact.
Often grown together in the farmer’s fields;
They were developed for their excellent nutrition.
While many varieties have survived today.
There was more diversity before 1492.
Crops from the Americas transformed the world
And continue today to save many from starvation.

Posted by Toni Truesdale at 7:46 AM No comments:

Waters: Recognize Earth in crisis: We need to restore the natural flow and ebb

The transparent lingering ghosts of animals
Still drink some days at the moving water
Washed clean by the steep, annual monsoonal rains.
Inside the world within these timeless pools
Tiny fish dart between the rounded glowing stones,
Green vines pulse with the movement of flow and wind
As insects gleam on the surface.
Each day reflections those before and after,
Holy Ghost Creek.

Posted by Toni Truesdale at 10:30 AM No comments:

The Ironies of History: as we debate the merits of white "heros" in granite

Oh, what a heroes!
They discuss so endlessly,
Great men that (con) formed to
The great Western culture of civility,
White males of such complexity!

Columbus was a hero, they say,
Each year, we have to celebrate his day.
Just because he stumbled onto an island while,
In search of the opposite hemisphere.
He became the first, all right
To enslave and torture the residents,
Who came to see in peaceful curiosity?
Those crazy enough to cross the big sea.

Cortez, too, came from far away,
Glowing (and stinking) in metal clothes that glowed in the sun
Wielding strange weapons that impaled
With such cultural superiority.
He demanded gold, lots of gold,
To take back across the sea
Just to look good for greedy royalty.

Slave ship after slave ship
Crossed the Atlantic waters,
As the priests gave blessings for
The  “divine right” of Europe,
Chained inside, men were beaten
As women were used,
And the sick thrown overboard…
Lots of cash profit
For the social elite;
From the misery and kidnapping of humans.

What songs we sing to those illustrious men,
That considered all non-white people as tools to be used,
As they lived on Native land and harvested indigenous fields.

George Washington,
Was a fine fellow, they say.
All he took was Indian land
To pay his soldiers
That fought the crazy king George.
And to establish the rights of the few wealthy males
Over women, children, Black, and Native minorities.

Thomas Jefferson, that Founding Father,
Kept his own children as slaves.
Considered the great mind of his day,
Hid his Black wife away.

Custer was a vain man,
He had fine curls,
Gold trim on his jacket,
That he wore with such grace;
All the other soldiers wanted to imitate,
His military tactics.
It was not just his ego that was defeated by those united Sioux tribes
That he considered so “primitive”.

Just why do we have
These men in books?
Why do we study their lives so religiously?
Instead of recognizing hypocrisy?

And what God did they worship,
And expect all to follow?
Christians who pray to kill, conquer,
And accumulate wealth beyond spending,
Things beyond using, food beyond eating
While others go without?
Did Jesus use weapons to harm and betray?

So I ask,
Just what is a hero?
What did these men believe?
It seems they emulate the actions of Judas
More than following the teachings of Christ.
How brave are these men
To use force to convince others of
Religious superiority?

And where are the Peacemakers
When we talk of history?
Those that did not defeat or use arms?
Where are those that chose to communicate?
Often muted too soon,
Even if their words live on.
Patiently waiting for us to listen
To the reason of peace.

So, I ask;
What is status?
A title, wealth?
And define nobility.
For what price is paid and by whom;
When we toast these “heroes”
What do we really emulate?

Posted by Toni Truesdale at 11:03 AM No comments: