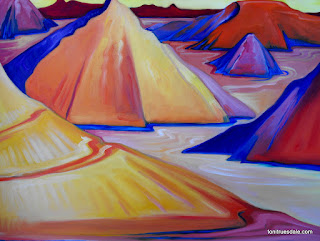 Looking up into temples of stone:
Empresses seem seated on high thrones
Of red rock soaring upwards;
Arches blink tiny windows of contrasting color
As eyes blindly stare
Down walls of petrified faces.
The monuments glow in the days embers,
Clouds gather to sear the blues,
The fire of the day is arrested,
Permeating dusk


Into the still shimmering sky.
Posted by Toni Truesdale at 10:00 AM No comments:

white is the absence of color 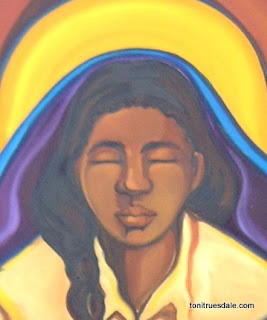 White is the absence of Color
Fear in a rainbow world
Where the extreme and stereotyped are esteemed and taught;
Disjointed by anger and guilt
All white and too black
Suppressing the complication of grey.

As the hues of the beautiful brown, reds and yellows are ignored.
Fear of color…
The darkest eyes are glanced away
So not to see most of humanity

Why criticize the night
And condemn all the tones of the earth?

For white is the absence of color.
Posted by Toni Truesdale at 11:49 AM No comments: 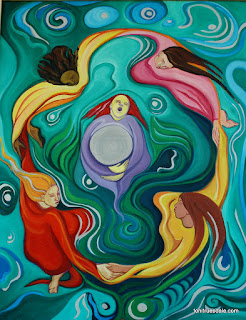 Many ceremonies all over the world are danced in a circle.
In the northern hemisphere people dance counterclockwise.
In the southern hemisphere people dance clockwise.
We all follow the rhythms of the earth.
The drumbeat is the heart of the great mother, ancestress of all life.
All people have danced in this way at one time.
We all share a common humanity and one inter-tribal world.

Posted by Toni Truesdale at 1:20 PM No comments:

The Hopi bring words of caution and choice to the world 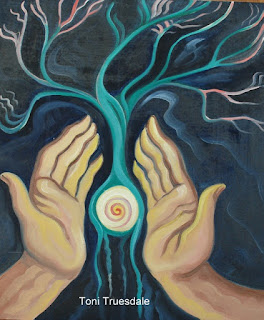 The Hopi had long been custodians to a prophecy written on a stone tablet.
Their instructions, from the creator, to migrate to a special place and to keep this secret.
They would know the time to bring it forth and share with the world.
Carl Jung went to the Hopi to ask them about this, but was refused,
for the elders felt the time was not right.
It is said that the testing of the nuclear bombs in New Mexico triggered the Hopi
to send out four men to talk to the world about the path it was taking in 1948.

The Hopi received their original instructions, in these was the caretaking of sacred knowledge,
the setting of the shrines to the four directions and to become a spiritual center
where prayers are said for all life on earth to live in balance, harmony and peace.

One messenger was Thomas Banyacya, I met him several times in Philadelphia at Friends Meeting House as well at a symposium many years ago.
He was introduced by Onondaga Faithkeeper Oren Lyons in this way:
"Thomas got on the plane in Arizona, it was softly raining. The rain followed Thomas
to the east coast where it became snow that fell in a horizontal pattern as he got off the plane."
Rain is a sacred blessing in the Southwest.
Thomas Banyacya told the story of the prophesy stone many, many times.
He with other Indigenous leaders delivered their prophesies to the UN.

We have a clear choice if we continue on the path of war and destruction.
We must chose to live in balance with the natural world.
He warned of a the changes in climate, drought, flooding, winds...
And of a Third World War which will destroy all mankind.
https://www.youtube.com/watch?v=VXnFhr6y8jI
“The law says if you poison the water, you’ll die. The law says that if you poison the air, you’ll suffer. The law says if you degrade where you live, you’ll suffer... If you don’t learn that, you can only suffer. There’s no discussion with this law.” - Oren Lyons