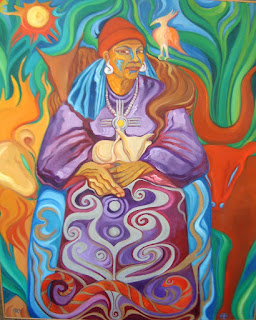 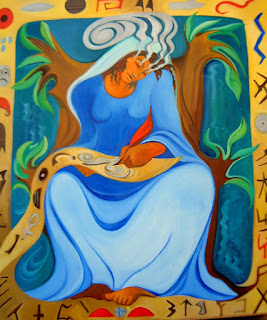 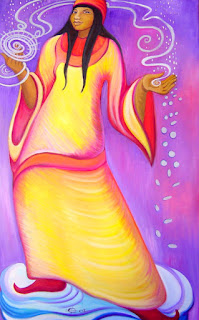 For centuries the visionary and healing gifts of women went underground in Europe (19 Good Friends) existing on the fringes of culture, often persecuted by religious zealots. Within the Christian church however, some women found their voice in sacred songs and visions (20 Hildegarde) such as Hildegard of Germany and Julian of Norwich who are still regarded in the Christian tradition as pivotal. Again, in the late medieval era, women mystics became persecuted by authoritarians. Outside organized Christian religion a sect of women lived in early communes, also served the community and had visionary experiences; they were called the Beguines[1] (21 Beguine). Experiments in religion and science brought about the illegal study of Alchemy. Where most European women were involved only symbolically in the mystical practice; in China Master Teacher Geng[2] (22 Master teacher Geng) rose to prominence in ninth century court by spinning snow into silver. She was an important imperial court Tang Dynasty counselor.

Posted by Toni Truesdale at 9:35 AM No comments: