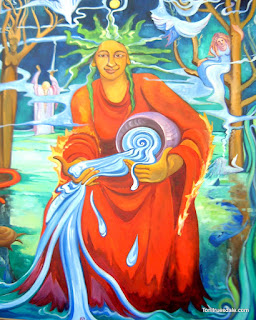 “Woman by the Well”


Were all innate realms of  ancient female deities;


For all tribal European cultures.


Brigit of the ancient Irish evolved from the original Dana.


Christianized, she remains associated with fire and water.


Arthurian Lady of the Lake predates the mythic cycle


Wherein she reaches through time.


Mama Wata, who melds the European with the West African,


She echoes the Medusa of Mediterranean Sea


Who was transformed by patriarchy into a fierce monster


But who came from the original Mother Earth religions


That listened to speech of snakes in sacred houses.


And in the sea, Silkie and Mesuline still hint


At the power of women and water


Wells were used all over the world as channels to the spirit world.


And still today, many indigenous cultures


Hear the woman in the sea, by the well and in the water.