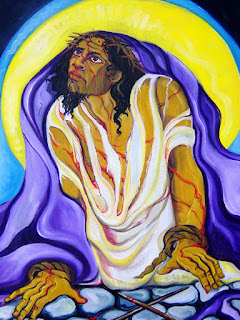 “ I know a man, and I just want to talk about him a minute, and maybe you will discover who I am talking about as I go down the way, because he was a great one. And he went about serving. He was born in an obscure village, the child of a poor peasant. And he grew up in still another obscure village, where he worked as a carpenter until he was 30 years old. The for three years, he just got on his feet, and was an itinerant preacher. And then he went about doing some things. He didn’t have much. He never wrote a book. He never held an office. He never had a family. He never owned a house.; He never went to college. He never visited a big city. He never went two hundred miles from where he was born. He did none of the usual things that the world would associate with greatness. He had no credentials except himself.


He was thirty-three years old when the tide of public opinion turned against him. They called him a rabble-rouser. They called him a troublemaker. They said he was an agitator. He practiced civil disobedience; he broke injunctions. And so he was turned over to his enemies, and went through the mockery of a trial. And the irony of it all is that his friends turned him over to them. One of his closest friends denied him. Another of his friends turned him over to his enemies. And while he was dying, the people who killed him gambled for his clothing, the only possession he had in this world. When he was dead, he was buried in a borrowed tomb, through the pity of a friend…” From: The Drum Major Instinct 1968