Let us remember our american halocaust, the true history of land theft 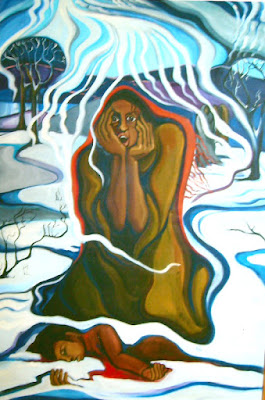 
Just after Christmas, 1890, a group of Minneconjou Sioux


They were led by Big Foot, who was very ill with pneumonia.


The tribe had just come through the Badlands with great difficulty.


It was frigid. The very air froze on the breath of the people.


Big Foot traveled in a wagon with a white flag.


He had hoped to join Red Cloud at Pine Ridge


to protect his people from the U.S. Calvary.


Major Whitside caught up with him on December 28.


He took the small band to camp at a creek called Wounded Knee.


The morning of the 29th, Colonial Forsyth, from Custer’s old regiment,


Proceeded to harass the Minneconjou men while looking for weapons.


A Young Man, Black Coyote, was trying to put his hunting rifle down.


The soldiers grabbed him and roughed him up.


No one is really sure if it was a gun or who fired it. The soldiers didn’t investigate,


They opened fire instead.


The Minneconjou had been disarmed, they had only a few knives and clubs.


There was a brief struggle.


stationed on the hill above aiming at all the women and children.


It didn’t take long to kill nearly three hundred of the Sioux band.


Only a few soldiers died; mostly by friendly fire in the killing frenzy.


The people were buried in a huge mass grave, dug into the frozen ground.


Together in a mass grave, their bodies were contorted in the agony of violent death.


to testify silently on the depopulation techniques of the U.S. Government.


The Mass murder was legal,


The soldiers awarded the “Medal of Honor”.